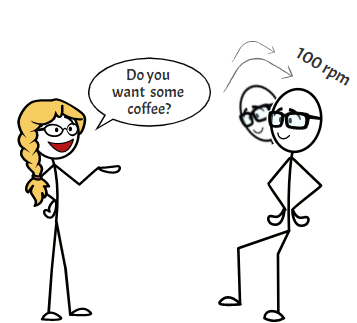 If you’ve ever witnessed an Indian wobbling his head,
You’ve probably wondered “was that a yes or was that a no“? OR
Perhaps you thought there’s something wrong with that neck
while he viscously nodded to your speech?

I’ve been wobbling my head since almost three decades now without realizing that
it wasn’t a norm elsewhere. So, when in the Netherlands someone asked me, if that nod meant a yes or a no, I was stumped. (by his naivety).
That he did not know what it meant came in as a sheer surprise.

Of course, that didn’t stop me from wobbling my head
I decided to publish these guidelines instead! 😎

How to Interpret the Indian head wobble?

[farewell story]
Someone : Would you like a beer?
Me: (nods up and down)
Someone: Brings beer. Not for me.
(Didn’t register a Yes.) 😒

A simple nod (up and down) means an obvious yes. It’s a pity, some don’t reckon this simple gesture yet. That made me reconsider a voice-over with this wobble.
[Destroys the whole purpose of wobbling my head] 😠

[say cheese!]
I hate blue cheese.
You’re lucky that I tried it even once. (I grew up on processed cheese.)
It smelled so foul that I had to gulp down the whole piece. 🤢
That was tough. But then you asked “if I want more ?”
I nodded my head (in sheer disgust).
I thought that was clear – an obvious NO
But there you were, pouring some more!

If it weren’t you, I wouldn’t have given up french cheese!

You : Shall we order a cheese plate?
Me : (nods left and right)

3. What’s with that constant nod?

I’ve got to speak even as you speak. (be it with my wobbling head)
That’s mere telepathy to convey if I agree or disagree.
( of course, that assumes my opinion is important) 😎

Boss: This year hasn’t been good for the company. We can’t offer promotions.
Me : (Nodding head left and right)
Boss : In fact we’re thinking of cutting down salaries. We’re looking for volunteers.
Me : (still nodding)

Boss: You! Thank you for volunteering
Me : WTF!
[I just disagreed]

The next time I sit in those board room meetings, I’ll bring some sign boards along with me.

They’ve got a population of more than a billion in India.
You’ve got no time to greet everybody, That’s why they invented a wobble to greet.

Are there more expressions?

Head wobbling is a language on its own. They’re a dozen other expressions to convey your message. I suggest you scroll through YouTube once.

Although the ones I describe here, cover eighty percent of the wobbling business.

Why do they wobble?

Good question. I’ve got a theory for this. (since there is no exact answer)

A lot of communication in India is non verbal.
Facial expressions, hand gestures, tone of your voice and the head wobble.
They’re all used to emphasize your view, to be influential (amidst crowd and chaos).

The head wobble comes in very handy when talking to strangers,
who don’t speak your language or while talking to acquaintances,
who would not listen. Wobbling as you speak means double emphasis.
You certainly get the attention.

Afternote: Seventy percent of human communication is actually non verbal.
So, I wonder if there’s something wrong with the head wobble!
Perhaps, if it you don’t wobble, you might as well be doing something else! 🙄